Together this team of tinting vigilante’s has over 100 years of experience.

This means you can be sure these guys know what they are doing. Though Dave supports Geelong. But his tints are so good we let that slide.

Don’t take our word for it though.

We are a 3M selected licensed dealer, (We’ve got badges to prove it) and only the best tinters get that.

We are trusted by car owners and dealers alike with premium luxury car tinting. If Batman moved to Perth, we’d be the guys tinting the Batmobile.

With all this expertise and knowledge our guys will take you through the end to end process. Tinting is not ‘one size fits all’ process so they use their experience and skills to make sure you get the right product to suit your needs and budget.

And we don’t just do cars. Residential and commercial buildings need tinting too. Keeping the sun out of homes and offices keeps you cool and collected.

Our focus is on you and getting you the best results, and as we have businesses across WA, there’s always a store close to you.

If the sun’s poking in where it’s not wanted, give us a call. 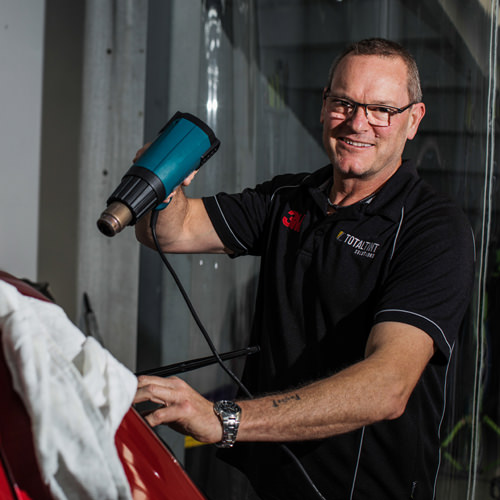 Colin has been tinting cars since 1985, longer than Kylie’s singing career, and before Crocodile Dundee hit the screens. He’s a true tinting veteran with in-the-trenches practical knowledge.

After 33 years he still likes to pick up the tools and get his hands dirty with the rest of the boys.

He joined the T-Team, because he recognised their strong ethics and high standards..

He likes spending time on the water and watching the Eagles win. He watches them lose too although doesn’t enjoy it as much. True fan. 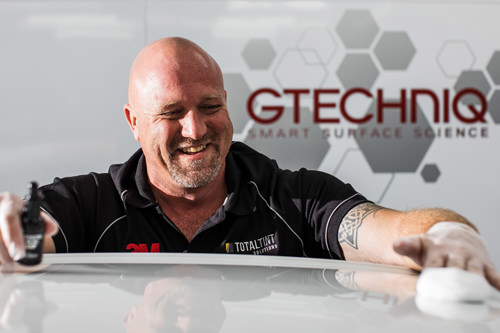 Brett started tinting in 1988 and still loves what he does. (So do we Brett!) He finds it incredibly rewarding applying his hard-earned skills on cars, boats, and people’s home.

With Kylie Dillon, he founded the Total Tint Solutions in 2014. Then in 2018 they brought together a great team of experienced tinters (aka T Team) who knew how to run a business right and picked the right brands and products for the best quality and price.

He strives for his best and that’s driven the business forward to where it is now.

Outside work hours he loves his footy, watching his kids play sports, and responsibly sticking to the speed limit on his CBR1000R road bike.

He still dreams of the time he tinted a Maybach so if you ever see his eyes glaze over just snap him out of it.

Favourite Weapon: His trusty heat gun, always at his side. He doesn’t go looking for trouble, but he’s always ready.
Specialist Skills: “Wax On, Wax Off” vehicle paint protection. This is real Mr. Miyagi stuff and Brett is the master.
Dream Car: Lamborghini Aventador, though that Maybach…
Store: Osborne Park and Wangara.

David Caldwell began relatively recently compared to the veterans in 2005. He’s not sure if he likes it yet but it’s been 13 years so we think he must be fairly positive about it. At least 6/10.

He’s built a great team that have fun in what they do and cover a wide range of film products.

From tinting vehicles to vehicle wrapping and specialist paint and vehicle protection films.

He joined Total Tint Solutions to be part of a group of professionals with the drive to be the best with quality products at affordable prices.

One of his customers is so impressed with his work that she often shouts out her Facebook reviews in caps. High praise indeed.

The most expensive vehicle he’s ever tinted is a campervan. Not just any campervan though, the Winnebago, which costs more than most high-end cars.

In his spare time he loves to surf, play drums, watch Geelong in the AFL, and spend time with his family. Some of these things he can do at the same time.

Mick’s been tinting since 1994, the same year Pulp Fiction came out. Since then he’s built his team, bringing the best people in for the job.

He admits that he’s a bit OCD, but frankly this ocd makes him a true tinting artist and in this line of work it helps.

The best car he’s ever tinted was a Porsche GT3 RS, which is coincidentally his dream car.

He describes himself as grumpy but fair. Everyone we talked to agreed suspiciously quickly.

Not surprisingly motorsport is one of his hobbies/obsessions. He spends a fair bit of time at the races at Barbagallos, where he races a WXR Subaru 99.

The other guys get glowing testimonials and of course Mick does too. But he also gets flowers. We shouldn’t be so surprised because he is very good and deserves them.

Our newest ‘grease monkey’ Dave Birtwistle has had a passion for cars and racing since he was in the womb.
Don’t be fooled by his mullet, he is a real gun in business and likes to stay ahead of the game, because ‘If you ain’t first, you’re last’.

Known as ’spud’ due to his love of chips, he will win you over with this great customer skills, refreshingly straight forward and honest approach.

He lives and breathes cars, boats and motorbikes and has been running his own show for many years. He goes beyond to help out his customers and is a genuine chatter box.

If he’s not taking his son to race motorbikes, then he’s spending quality time with his family.
Not afraid of being in the fast lane, he will master a quote, tint, wrap, and smile all the way to the finish line.

Specialist skills: The gift of the gab.
Favourite weapon: The phone, cause he loves to chat.
Dream car: Dodge Ram
Store: Wangara

Having identified a niche in the window tinting market, Kylie joined forces with Brett in 2014 with the idea of doing something bigger and better in the tinting industry in WA. She set about creating a modern, responsive business based on customer focus and core values.

New technology is a key part of her strategy as she constantly seeks to improve the offerings to the customer.

She is a powerhouse behind the scenes putting in massive amounts of energy to her work and solid team support.

While she doesn’t do tinting herself, she understands the processes that go into it.

Like many of the team at Total Tint Solutions, family is hugely important for Kylie and she has fantastic support from her 2 gorgeous children and husband.

Just had my old Tiburon tinted and damnn!! Looks amazing! Great service, people were very friendly & took pride in their work. Have recommended to friends already so expect some more customers